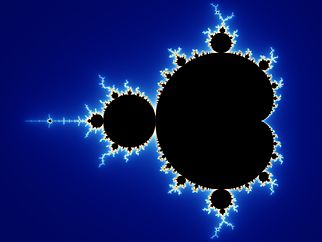 In mathematics the Mandelbrot set, named after Benoît Mandelbrot, is a set of points in the complex plane, the boundary of which forms a fractal. Mathematically the Mandelbrot set can be defined as the set of complex values of c for which the orbit of 0 under iteration of the complex quadratic polynomial zn+1 = zn2 + c remains bounded.1 That is, a complex number, c, is in the Mandelbrot set if, when starting with z = 0 and applying the iteration repeatedly, the absolute value of zn never exceeds a certain number (that number depends on c) however large n gets.

It does not simplify at any given magnification

When computed and graphed on the complex plane the Mandelbrot set is seen to have an elaborate boundary which, being a fractal, does not simplify at any given magnification.

The Mandelbrot set has become popular outside mathematics both for its aesthetic appeal and for being a complicated structure arising from a simple definition, and is one of the best-known examples of mathematical visualization. Many mathematicians, including Mandelbrot, communicated this area of mathematics to the public.