What has a paradox of an old Greek to do with the burning bush that Moses saw in the desert?

First let’s see in what this Zeno paradox consist of. There are two versions of the Zeno’s paradox, the “Achilles and the tortoise” and the “The dichotomy paradox”. Both describes that “all is one” and that, contrary to the evidence of our senses, the belief in plurality and change is mistaken, and in particular that motion is nothing but an illusion. Then we will consider the “Quantum Zeno Effect” and why quantum effects does not occur on macroscopic levels. But the implication of all this insight might be very mysterious for some people.

Achilles and the tortoise

A fractal used to explain the paradoxes of Zeno of Elea — a movement can become impossible if its distance is recurrently divided into smaller pieces. The girl is assumed to walk three times as fast as the turtle, but whenever she turns a corner the turtle will, too. Even though she is faster, she will not see the turtle within a finite number of turns. 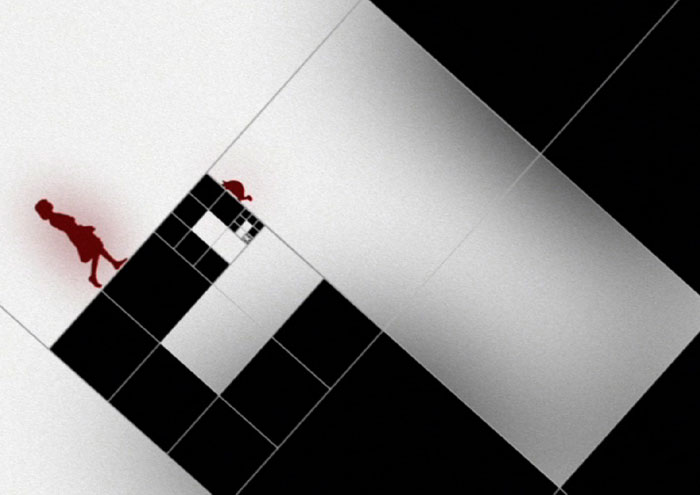 The paradox of Achilles and the Tortoise can be applied also to a Fibonacci Spiral. Perhaps you can now intuitively deduce that this paradox is in some kind related to consciousness (what else).

The resulting sequence can be represented as:

This description requires one to complete an infinite number of tasks, which Zeno maintains is an impossibility.

That which is in locomotion must arrive at the half-way stage before it arrives at the goal.

This sequence also presents a second problem in that it contains no first distance to run, for any possible (finite) first distance could be divided in half, and hence would not be first after all. Hence, the trip cannot even begin. The paradoxical conclusion then would be that travel over any finite distance can neither be completed nor begun, and so all motion must be an illusion.

This argument is called the Dichotomy because it involves repeatedly splitting a distance into two parts. It contains some of the same elements as the Achilles and the Tortoise paradox, but with a more apparent conclusion of motionlessness. It is also known as the Race Course paradox. Some, like Aristotle, regard the Dichotomy as really just another version of Achilles and the Tortoise.

There exist also a third paradox, called the “The arrow paradox” making any motion impossible. But I will not mention it here, because I am sure that after you has understood it you will bang your head several times on the desk!

The quantum Zeno effect is a name coined by George Sudarshan and Baidyanath Misra of the University of Texas in 1977 in their analysis of the situation in which an unstable particle, if observed continuously, will never decay. One can nearly ”freeze” the evolution of the system by measuring it frequently enough in its (known) initial state. The meaning of the term has since expanded, leading to a more technical definition in which time evolution can be suppressed not only by measurement: The quantum Zeno effect is the suppression of unitary time evolution caused by quantum decoherence in quantum systems provided by a variety of sources: measurement, interactions with the environment, stochastic fields, and so on. As an outgrowth of study of the quantum Zeno effect, it has become clear that application to a system of sufficiently strong and fast pulses with appropriate symmetry also can decouple the system from its decohering environment.

… an unstable particle, if observed continuously, will never decay …

The name comes from Zeno’s arrow paradox which states that, since an arrow in flight is not seen to move during any single instant, it cannot possibly be moving at all.

An earlier theoretical exploration of this effect of measurement was published in 1974 by Degasperis and Alan Turing described it in 1954:

It is easy to show using standard theory that if a system starts in an eigenstate of some observable, and measurements are made of that observable N times a second, then, even if the state is not a stationary one, the probability that the system will be in the same state after, say, one second, tends to one as N tends to infinity; that is, that continual observations will prevent motion …

According to the reduction postulate, each measurement causes the wavefunction to “collapse” to a pure eigenstate of the measurement basis. In the context of this effect, an “observation” can simply be the absorption of a particle, without an observer in any conventional sense. However, there is controversy over the interpretation of the effect, sometimes referred to as the “measurement problem” in traversing the interface between microscopic and macroscopic.

Humans has a limited ability to observe

Now the point is that humans has only a limited ability to observe. We cannot observe infinite numbers of states, therefore movement occur. It is like between the frames of a movie, there is blackness between them or a kind of uncertainty. The quantum states exists as probability states, also their location and their spin. This is the reason why quantum effects does not occur on macroscopic level, because human consciousness is not a continuous field. We cannot observes all states between the frames. We perceive only “24 frames per second”, but it looks like it is a fluid movement. The states between the single frames are interpolated by our mind.

I bet if you add to this insight also the theory of biocentrism, than you will bang your head on the desk. If you has not done yet, do it now!

What is the void between the frames?

Between the “frames” of this movie the whole “plot” is reevaluated by the collective consciousness. A quantum state is not only of interest of one human, but it involves humanity, all life-forms. In a laboratory a measurement of a single small quantum state is of no or little importance for the rest of humanity. On the other hand is the quantum state of a building on macroscopic level of high importance for all life in it and around the building. If quantum effects would reach the macroscopic level by humans observation, then this world would probably stop to exist, or we would live in a dream like world, where mountains are moved by the mind of a children. One thing is sure, that the fact that we cannot reach macroscopic levels with our limited consciousness is a “build in security system” in our Biocentric Universe.

Collapse of the Wave Function - No Quantum System is truly isolated

“The theory of decoherence reconciles the Copenhagen interpretation with quantum superpositions in the absence of measurement or conscious observation. Any interaction, or loss of isolation, of a quantum superposition with a classical system (e.g. through heat, direct interaction or information exchange) would “decohere” the quantum system to classical states. But decoherence theory doesn’t define isolation (no quantum system is truly isolated from its classical surroundings) nor deal with superpositions which are isolated.”

The Burning Thornbush that was not consumed by the Fire

The burning bush is an object described by the Book of Exodus as being located on Mount Horeb; according to the narrative, the bush was on fire, but was not consumed by the flames. (Exodus 3:1-5)

Some scholars of the scriptures thinks the burning bush is a mistaken interpretation, a “copyist’s error” or even that Moses was under the influence of a hallucinogenic substance when he witnessed the burning bush.

The disbelieve of this scholars is comprehensible considering that they has little or no knowledge in modern science. But that the burning bush was not consumed under the fire is a clear evidence that there was a higher spiritual being with a “continuous field of consciousness” present.

Scientific Evidence for the Presence of a Higher Being

As I wrote before, quantum effects cannot reach the macroscopic level by humans observation, because our consciousness field is not continuous. But most people believes in Angels and the Bible mentions these creatures in many scriptures. And they seems to have a power that goes beyond the natural physical laws. If we consider that this creature are not made of flesh, but are spirits, pure consciousness, then we can deduce what powerful Quantum Zeno Effect’s they can achieve through their crystal clear ability to observe all atoms in a vast region, reaching even macroscopic levels with easiness.

Wonders are not contradictory to Physical Laws

A Angel observing the air around a thornbush would apply the Quantum Zeno Effect on a macroscopic level. The result would be that the air molecules would be arrested on their current position. This would create a very cold electroconductive plasma that emanates light, but it would not burn the bush, because this kind of “fire” is not a oxidative process, rather a electrical process (Electromagnetism is related to consciousness). Such a electric plasma would look like fire, but it would not consume the wood of the bush. A similar kind of fire is known in the field of Free Energy Research. The water that is contained in a Joe Cell (Cosmic Energy Cell) is altered by the self-similar construction and the electric current applied. This kind of water has a different “configuration” and it burns cold, without consuming oxygen. The experimenter can hold his hand in the flame without any harm.

Quantum Zeno Effect and the Entropy

Higher consciousness slows down the decay of matter and materials, the increasing of disorder and the loss of information. During the forty years in the wilderness the garments of the folk of God did not wear out.

So you can see that the presence of an Angel has also similar effects on material like the garments. How many times has you bought new shoes because your old ones worn out? If we all together, with our individual consciousness, would form a stable collective consciousness, then the entropic force would diminish and maybe also our health would benefit. Is it not so that the Bible repeatedly talks about Eternal Life on earth during the Kingdom of God? Science proofs that such a thing is not pure fantasy. The evidence is there, in Quantum Mechanics, in the Holographic Universe Theory and in the fascinating Electric Universe Theory. With this key of knowledge, I consider it as such, try to read the Bible again and this time be aware how often the Quantum Zeno Effect on a macroscopic level proofs the presence of Angels. It will shake perhaps your world view, but let it happen. Better you prepare yourself now in advance, before the collective consciousness will be established and the presence of higher beings will shake this world till to the very fundament.