Homosexuality can be cured by homeopathic treatment

Many homeopaths have reported seeing this happen to their homosexual patients, that after a treatment for a problem like a headache they reported that their former sexual orientation changed from being homosexual to healthy heterosexual.

How can that be that a remedy can change a sexual orientation?

Some people claims that the sexual orientation is not a perversion or a illness. So why then can a homeopathic remedy be successful in changing the orientation?

Apparently disinformation is deliberately disseminated. And history teach us, that misinformation is performed intentionally by people with a secret agenda. But it should not be too difficult to understand their motivations. At least we do not expect that politicians tells us the truth, why should we then expect the truth from people with egoistic motivations?

One motivation could be some kind of coward birth control for the earth population. China is doing this already. War is another kind of population control. And what method could be more efficient for controlling the grow of a population than to implant the idea that homosexuality is natural and even “cool“. Remember the 80s movies and series? They start by introducing the funny gay dude who was so harmless and a good listener for the problems of the girls. Then in the 90s the gay was a misunderstood being and human. During the year 2000 the sexual orientation started to become a personal choice, even being “bi” was considered fancy. More and more “come outs” filled the newspapers, most time of Hollywood stars or even politicians. Now the so called Gay-Agenda even attacked aggressively the CEO of a spaghetti fabric, because he was not willing to make a commercial with two gay mens at the table instead of a “traditional family“.

We can recognize here a movement that is sponsored, promoted and pushed by coward people who has not the best interests of humanity.

One thing is for sure, humans have the right to choose to do whatever they want to do. Our free will is a gift. But we should never be ignorant of the consequences of our choices. If homosexuality would be natural, why then are homosexuals so depressed, have a shorter life span than the average heterosexuals and why are they so inclined to get heavy auto aggressive illnesses?

Human beings are not created for homosexuality. And I know, this always hits the nerve of people who claims that no God exist, but you cannot ignore the facts that the universe has a very very very high level of order and that it is indeed designed by a intelligent being. So why should we go against this order? If God’s desire is that we are happy for all eternity then we should trust him and do our best to obey his commandments. Like all physical laws in the universe, moral laws has a specific purpose.

I make a clear distinction between people with a gone wrong sexual orientation and the people who promote actively the gay agenda. Who promotes this perversion is evil and should be exposed as that. But every human being that is born with a defect in their orientation should never be treated bad, because the Bible says that we need to love our neighbor. And we do not tolerate the promotion of a perversion, as we do not tolerate the promotion of lies, intentional misinformation and the perversion of what is natural.

When the flow of life force takes the wrong direction

Our human body has invisible pathways (so called meridians) for the life force. This is known in acupuncture for thousands of years. Life force is nothing else than consciousness (awareness). We have 12 main meridians and some extra pathways which function as a reservoir of the energy. This extra meridians are called the “extraordinary meridians“. 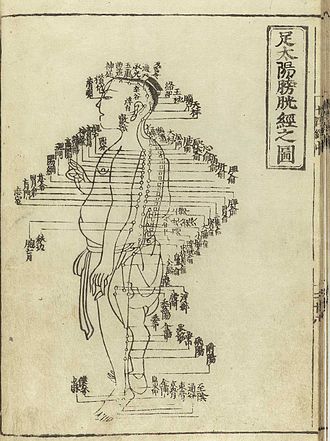 One of this meridians is called the “Governing Vessel”. It starts from the perineum just before the anus, runs upward along the midline of back to the head and stops on inside of the upper lip. The direction of the energy flow is very important for the overall health and the mind.

If this energy would flow from the top back to the anus it would cause a blockage in the first and second chakra. When this happens during childhood it is possible that this causes a lot of problems in the sexual orientation, especially if this happens before the puberty starts. It is known that this reverted flow of the Governing Vessel could be caused by birth trauma. One reason why especially trauma remedies was successful in changing the orientation.

Every homeopathic remedy, even acupuncture, which is applied for “secondary problems” can alter the sexual orientation, changing it to the healthy state of heterosexual.

Homeopathy can help if applied individually. There is no pill against homosexuality, but if a man or woman is aware of his unnatural state and aware that this is indeed a illness that can be cured, then homeopathy can be used to cure the trauma which lead to this state and from this point on it should be only the case of a free choice if one is willed to continue with the perversion or if one is willed to change his personality. Praying to God helps a lot!

(I guess that homeopathy cannot cure evil or ignorance … there is no remedy against such things!)

I hope I have not offended anyone. But if I have offended one of the promoters of the gay agenda, well, the truth may hurt who is willed to live in the darkness!