The Secret Life of Plants

The Secret Life of Plants (1973) is a book by Peter Tompkins and Christopher Bird. The book documents controversial experiments that reveal unusual phenomena regarding plants such as plant sentience, discovered through experimentation. It goes on to discuss philosophies and progressive farming methods based on these findings. 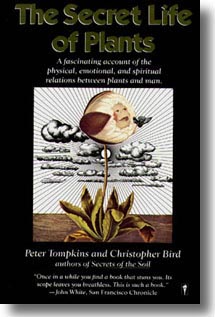 The book includes summaries of the life and work of 20th century scientists Jagdish Chandra Bose and Corentin Louis Kervran as well as 19th century scientist George Washington Carver. The book also discusses alternative philosophy and practice on soil and soil health, as well as on alternative farming methods. Topics such as magnetotropism, bio-electrics, aura, psychophysics, orgone energy, radionics, kirlian photography, and dowsing are discussed. One of the book’s controversial claims is that plants may be sentient despite their lack of a nervous system and a brain.

The book includes experiments on plant stimuli using a polygraph, a method which was pioneered by Cleve Backster.

The book was the basis for the 1979 documentary of the same name, directed by Walon Green and featuring a soundtrack by Stevie Wonder, later released as Journey through the Secret Life of Plants. The film made use of time-lapse photography, where plants are seen growing in a few seconds, creepers reach out to other plants and tug on them, mushrooms and flowers open.