World Trade Center controlled demolition conspiracy theories contend that the collapse of the World Trade Center was not caused by the airliner crash damage that occurred as part of the September 11, 2001 attacks, and the resulting fire damage, but by explosives installed in the buildings in advance. Early advocates such as physicist Steven E. Jones, architect Richard Gage, software engineer Jim Hoffman, and theologian David Ray Griffin, argued that the aircraft impacts and resulting fires could not have weakened the buildings sufficiently to initiate a catastrophic collapse, and that the buildings would not have collapsed completely, nor at the speeds that they did, without additional energy involved to weaken their structures. 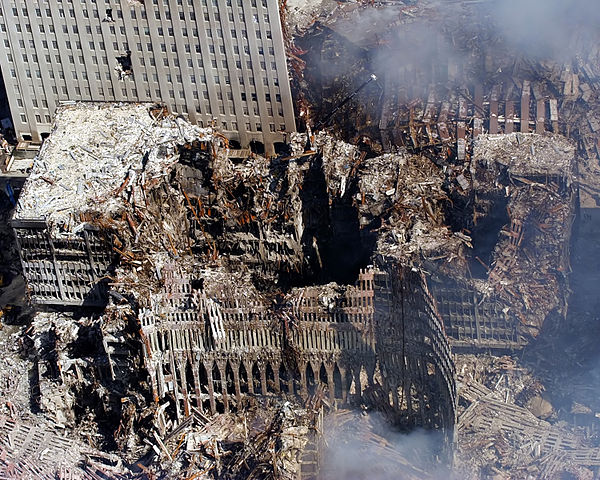 Physicist Steven E. Jones, among others, points to many descriptions by individuals working on the WTC rubble pile suggesting the presence of molten steel in the pile and a stream of molten metal that poured out of the South Tower before it collapsed as evidence of temperatures beyond those produced by the fire. Jones has argued that the molten metal may have been elemental iron, a product of a thermite reaction. Jones and other researchers analyzed samples of dust from the World Trade Center buildings and reported their findings for evidence of nano-thermite in the dust. Jones informed NIST of his findings and NIST responded that there was no “clear chain of custody” proving that the dust indeed came from the WTC site. Jones invited NIST to conduct its own studies with dust under custody of NIST itself, but NIST has not done so.

Members of the group Scholars for 9/11 Truth have collected eyewitness accounts of flashes and loud explosions immediately before the fall. Eyewitnesses have repeatedly reported of explosions happening before the collapse of the WTC towers, and the organization “International Center for 9/11 Studies” has published videos obtained from NIST, together with indications about when such explosions could be heard. Some proponents of World Trade Center controlled demolition theories suggest that 7 WTC was demolished because it may have served as an operational center for the demolition of the Twin Towers, while others suggest that government insiders may have wanted to destroy key files held in the building pertaining to corporate fraud. The WTC buildings housed dozens of federal, state and local government agencies.