On twitter a open minded person asked my if I have any article about “healing energy and the properties it contains“. And here is my answer: I will write one.

First of all, let me begin with the basics.

What is energy? Has energy a quality? In physics, energy is one of the basic quantitative properties describing a physical system or object’s state.

In mainstream physics energy has no quality, only a quantitative property.

Energy can be transformed (converted) among a number of forms that may each manifest and be measurable in differing ways.

But if energy can assume a certain form, than it must have a quality too, right?

Units of measurement for energy are usually defined via a work process. … the force applied by the given body, multiplied by the distance …

Distance relates to space, space relates to time too because it’s a continuum (spacetime), so it relates to frequency and therefore it must have a quality by it’s information it carries. Aha, so has energy a quality or does it only act as a carrier for information?

Is information independent from energy?

Information, in its most restricted technical sense, is a sequence of symbols that can be interpreted as a message.

A message is not just a bit of yes or no. It requires a context, someone who understand the message, a intelligent person. Therefore information in it’s most fundamental sense makes only sense if there is a consciousness which can understand it. Communication is the bridge which reconnects what once was a whole one.

From this point of view information is only available if it is communicated or remembered. Recalling a information out of the memory involves energy too.

Energy and information seems to be both the same. Indeed both has similarity in their properties. For example the law of conservation of energy states that energy can be neither created nor destroyed. Same applies to information, but only if the information as message is the truth. Eternal principles like the simple calculation of 1 + 1 = 2 will always remain the same and never be destroyed.

And there is another deep relation between information and energy:

If in a bean machine all particles would accumulate on one extreme, … like in this picture below … 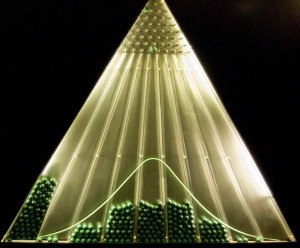 … then something or someone has put in order. This means that it deviates from the normal distribution curve and is not random. By pure chance no order is created. Without order no energy can be released. A full loaded electric capacitor can release energy by closing a circuit. Who has loaded the capacitor??? Who has changed the order which deviates from pure chance? So there would be no energy inside a capacitor without a conscious individual person. You can explain it also with the children’s room where sometimes a real chaos exist and then on the next day everything is on it’s right place. Maybe the parents have cleaned up the room or the children. But by pure chance no order will be achieved.

Will the amount of energy change inside a closed system by time?

Will the amount of order change?

But if the order transforms into absolute chaos and no life form exist anymore, then energy by itself would make no sense. The medium for transporting the information has lost it’s purpose.

Now I have written something which needs to be further explained.

The other way around, …

Would energy increase if someone would put into our universe a new information?

I think yes, because our universe is a fractal in it’s nature and every new information or message is a change of the whole one. You see, our universe is indeed a closed system, but without boundaries in space-time. Outside of the space-time, what we call heavens, other energy exist, and eventually time flows there too, because intelligent beings perceives changes and they communicate with each other, which requires time (relationship between the states) and space (relationship between objects or persons). If you believe in the Bible you can read what happens when new information flows into our universe, how things then change … Revelation 5:1–8:6, 8:7–14:20, 15:1–16:21 and 20:⁠11–22:5.

Communication is essential for life

Let’s assume someone tells a lie because he desires to achieve power. The person who listens to the lies may not be able to recognize this information as a lie and integrates this false information inside his own system. With the time the lie sinks more deep into the unconsciousness and creates blockages on several levels. All the offspring of that person will inherit the lie and that lie will generate in them similar blockages too. Because awareness is decreased by the lie, all the victims will have a kind of blind spot for the lie itself. With certain informations the blockages can be dissolved, but they will regenerate again because of the lie which continues to persist.

Alternative medicine often use information imprinted on carrier substances which can trigger the dissolving of the secondary blockages. Homeopathy works for humans, animals, plants and even bacteria. It doesn’t require faith or knowledge about the remedy, because the homeopathic signal reach the unconsciousness without a conscious processing of the information. Indeed bacteria or plants are not conscious, but unconscious, which doesn’t mean that they are not conscious at all, but they have a much bigger unconscious part as the conscious part. Animals for example are aware of the now, but they do not think of the future. Their awareness is limited, specialized on other aspects of the reality.

The dissolving of a “sulfur blockage“

Compulsive hoarding (more accurately described as “hoarding disorder”) is a pattern of behavior that is characterized by the excessive acquisition of and inability or unwillingness to discard large quantities of objects that cover the living areas of the home and cause significant distress or impairment. In homeopathic therapy this disorder is treated with the help of a remedy known as “sulfur” which is made of chemical sulfur element. Because all elements have a order and their specific “message”, a remedy made of sulfur carries the information of this element. The patient will take the remedy and maybe even forget after some days that he have taken it, but after some weeks his thoughts change, because the blockage inside his unconsciousness starts to dissolve. He begins to recognize that some objects in his living area are not really necessary and that discarding them will not hurt at all.

Sulfur can for example dissolve similar blockages on other levels of the unconsciousness which implies the unwillingness to discard large quantities of unnecessary knowledge. I’ve seen this especially in people with a great knowledge in certain topics, like for example egyptology or geology. No that egyptology or geology are not interesting topics, but if someone acquires knowledge only for the reason of knowledge it becomes a obsession. And indeed this people are obsessed by their knowledge.

The sulfur will trigger the dissolving of the blockage and helps one to discard the unnecessary.

The dissolving of a secret - Thuja

Some people are attracted by dark secrets or they attract them somehow by resonance. When they contact a homeopathic therapist they may not be aware of their burden they carry with them, like a shadow on their shoulders and all around them. If the therapist recognize the Thuja patterns, directly by asking if something specific happened in their past or by recognizing the physical patterns the blockage generates, he will choose this remedy. The patient will take the remedy and the gates of information opens inside him or her and maybe initially during the first weeks resistance against this opening will build up. It may lead to a initial aggravation. After this initial aggravation the patient will eventually let go of the secrets bound inside them, unleashing them by communicating with their friends, parents, or maybe a lawyer, depending of the kind of secret. Then it seems as more light is all around them. They perceive new hope by just one blockage dissolved. How will it be if the original lie will be dissolved?

Contrary to popular perceptions, mildness has strength. A mild answer, for example, can overcome opposition that seems as hard and inflexible as bone, perhaps because of anger or prejudice. This world is full of racism, racial discrimination, xenophobia and related intolerance. If someone is a target of such a prejudice automatic self defense mechanism are activated and they get blockages which leads to isolation and on their own prejudice is developed. Kind words can then heal the person, the relation and the prejudice begins to dissolve. Right now in the news I see how conflicts in Russia and the Ukraine escalates. The fire is fueled by prejudice and triggered by egoistic people from outside the country, which delivers money to both opposite parties. In their rage they are not aware that they are controlled.

Healing energy is inside the message.

This spirit is able to heal really. It’s the force which originates from God, not from a human, not from a Reiki or Qi-Gong Master. It’s intentions are perfect, not stained by imperfection.

The truth is so easy and simple that it cannot be confused with any mystical teaching, esoteric or occult doctrine. It will dissolve inside the core of human collective unconsciousness the original lie and throughout it all blockages will be dissolved. When this happens, it will have a deep impact on all humans. It will touch their minds, awareness, consciousness, heart, it will increase the life force and it will enable the free flow of information between the consciousness and the unconsciousness, it will dissolve systems apparently stable and secure, destroy false teachings, uncover secrets and prevent subtlety in all forms, opening the heart and the mind for the truth.