A Fight against Global Apathy

But the whole world is descending into a state of apathy, lacking interest, indifferent, unconcerned of the suffering and the problems other people have.

Seen from the point of view of biocentrism, humanity as a collective consciousness, a global organism, is in a state of irresolution, not determined to recognize the truth or to become fully aware.

And day by day I see all around me people who are just apathetic, without interest in anything.

In contrast people who are aware and interested in many aspects of life are seen as “geeks” or “freaks“. Just because someone knows the name of a exotic flower, a star at the sky at night or the chemical composition of DNA, they step out of what is considered “normal“. But I believe in a imminent new world where people are really alive and interested in eternal and incorruptible things. Do you have the same hope?

Understanding the Reasons for Apathy

The main reason is the over stimulation by coffee, sugar, or lemonades which contains phosphoric acid and the exaggerated search for entertainment and materialistic goals. Most people are not aware that this is a life style which ends up in monotony. It burns up the “brain-resources”, it dulling the receptors of neurotransmitters like serotonin and it lowers also the production of this chemicals in the brain.

Some lemonades may contain phosphoric acids and stimulants like caffeine, which are a threat to the brain chemistry.

Another reason is the disappointment, the feeling of dissatisfaction that follows the failure of expectations or hopes to manifest. What can a human expect from a life in a imperfect system? Wrong expectations are very common. People believe they can achieve something in this world, become someone important or get rich. Or they expect idealistic motivations from the politicians, ignoring that this people hungers for power and are not willed to serve humanity. The World Religions disappoint peoples expectations, mixing up with politic instead to care about the spiritual needs of their members.

A Morphic Field which can be dissolved

If one is trapped in the “morphic field” of apathy, becoming free can be a hard fight, because the apathic state is of a low energy level and one needs a freeing impulse. Homeopathy knows this kind of state as the “phosphoricum acidum state“.

Take a look at the “Materia Medica“: 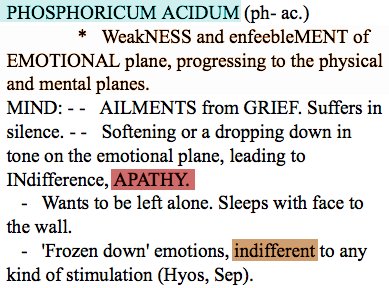 The homeopathic doctor prescribes a single dose of “Phosphoricum Acidum C200” if he recognize this apathic state in his patient. Just one dose is able to stimulate the body and mind to be pushed out of apathy. But the remedy is only a single stimulus. The patient needs to adjust his point of view regarding entertainment and food, especially stimulants. One of the best ways to overcome apathy is to help other people.