The Beauty of Nature and the Universe

In the beginning (time) God created the heavens (space) and the earth (matter). Time, space and matter forms relationship with each other. It’s unity and unity is based on love. Indeed the Bible says God is love. Everything in nature inherits unity, not only in itself, but with all it’s surrounding space and even unity in time by reflecting rhythms and fractal patterns. Examples of galaxies range from dwarfs with as few as ten million stars to giants with a hundred trillion stars, each orbiting their galaxy’s own center of mass.

The creation of God reflects his attributes. The vastness of space for example, we observe it through modern high tech telescopes, but we are not able to see it’s end. Where is the edge of the universe? Scientists can only speculate.

Then the huge amount of energy. A small stone has so much energy that if it could release it’s energy in a nuclear explosion, it could be compared to a explosion of 10 tons of TNT. And the universe is incredible energized, electricity, magnetic fields, light, radiation and so on. Inside the galaxies are gigantic black holes which forms the center or rotation of trillions of stars, and there are more than 200 million galaxies in the “visible” universe. All together they form clusters and mega-clusters of galaxies. This immensely huge structures looks like the neuronal structure of a brain. 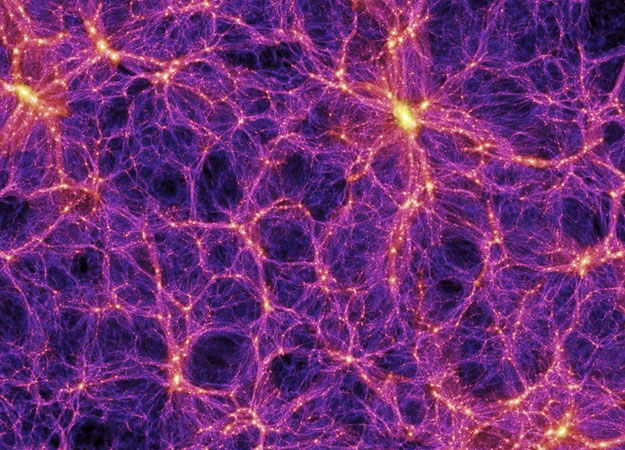 Simulation of the large-scale structure of the Cosmos. The image spans about 400 million light years across.

Without the light of our sun we would not be able to perceive beauty on our planet earth, not even able to live, because the energy of this star in the center of our solar system is what makes life possible.

And again it is the relation between each part what forms beauty, because we recognize unity in it. What we perceive as white light is indeed the combination of many colors. Unity is perceived as a pure white color. Pureness and perfection are often associated with the color white.

The color blue is associated with space. Beginning with our blue sky and our blue ocean … … till to the space and all the stars … … it’s like we can breath more deeply, just by watching this beautiful color. Blue is the most common color in the universe. Our father in heaven is communicating with us through his creation, telling us the truth.

But not only the vast space and the gigantic galaxies are beautiful. Watch the small living creatures, they reflect the attributes of God in a very special way. You don’t need to be a mathematician to appreciate this beautiful butterfly. But if you are a mathematician, or at least if you has some knowledge about mathematics, then you would recognize beauty in it’s proportions, symmetry, golden angle … well mathematics is all about relationship.

Beauty, the relationship which reflects unity and perfection, is not only visibly, it’s also audible! For example the singing of the whales … … their sound is very “archaic“, which means “ancient” or “from the beginning“.

All the colors, forms and the sounds are in a special relation to each other. The proportions converge to the so called Golden Ratio, a special ratio which enables objects to safe space or time. It enables to compress, to implode the blood in our heart and to cool it down. With ease our heart is able to pump blood through our circulatory system because of this ratio. The Golden Ratio, or the number phi (1,618 …), is called the divine proportion because it can be found everywhere in nature and it is a reflection of beauty and unity.

For example sea snails has a form similar to the Golden Ratio or similar to a logarithmic spiral. In mathematics, a spiral is a curve which emanates from a central point, getting progressively farther away as it revolves around the point. The spiral is also found in structures as small as the double helix of DNA and as large as a galaxy. The most interesting fact is that in nature beauty is always paired with functionality. Again unity and perfection. We can only attribute this wonders to our God Jehovah.