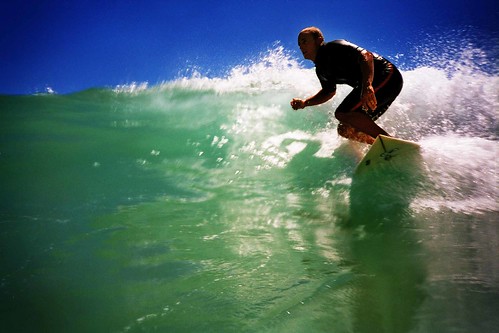 How does a wave like this one in the photo emerge?

In fact in the question “how does it emerge?” contains a important keyword: Emergence!

Observe this termite “cathedral” mound produced by a termite colony.

This is a classic example of emergence in nature.

How is it possible that millions of tiny insects can collaborate to build such a complex building, with air conditioning, specialized rooms for different purposes and maintain in it in a perfect collaboration?

Every single insect is not able to do only a fraction of this work. As individuals they are not intelligent enough. But as a collective their power and creativity is much more than the simple sum of all individuals. It seems that out of the mass it emerge something massively more complex.

Indeed the theory of “morphic fields” is a good explanation for this kind of collective consciousness. Ants, termites, bees, all this insects works together like as they “know exactly” what to do, when to do and how to do.

Back to the example of the water wave. All the molecules in the water move in a chaotic manner in different direction. But they all hold together by a electromagnetic field generated by the different charges of oxygen and hydrogen atoms. Because of this invisible field they can act as ONE.

And to add to this amazing discoveries some more I will not hold back the other discoveries made in the field of genetic and quantum physic. For example the DNA Phantom Effect, proofing that the DNA imprint his information into the empty space, in the vacuum, or that the mind is able to read the DNA code, interpret it and that the DNA also is affected by our mind, words and so on.

There are so many pieces of this big puzzle, that more and more they come together, than more the big picture assemble in front of our eyes. Maybe we can egoistical think “I will get some day a Nobelprice for my research and become rich and famous …”, but the truth is that the individual human is not able to do nothing! Yeah, you read right … the individual is able to do nothing, because the ideas jumping into our mind are not our own merit, because we are indeed ONE, we share one memory field, one collective consciousness field! The ideas comes from all of us! And they have not their origin in the individual!

(See also “The human DNA is a biological Internet“)

Is this idea difficult to comprehend? Then the implication of it will be even more difficult to grasp! Because they are vast! They are so deeply affecting our reality that we need to admit that every thought will change our reality, not only for “ME” but also for you and everyone else too! I would say this is a big responsibility that everyone has. Our private thoughts are not so private as we may think! I cannot imagine in my mind to do something without that my thoughts will affect the thoughts of my neighbor! He is also connected to the collective mind as myself. Therefore I need to keep on the watch what kind of thoughts I am used to have and if necessary to correct them. We are all breathing the same air! 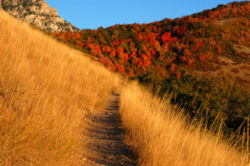 If many people follows the same path a trail forms on the ground. This trail becomes visible and then as consequence more and more people follow it, because it’s easier to follow an established path than to go every time a new way.

“… In the days of Ja´el, pathways had no traffic,

And the travelers of roadways would travel by roundabout pathways.”

This established paths are easier to follow, because the crowds follows them. They build the patterns that affects the thoughts of the collective mind. The “Noosphere” is feed by these crowds that on the other hand are manipulated by lobbies through great propaganda campaigns and well equipped public relation agencies. The television is in the hand of few powerful elites manipulating billions. Mass Media is controlling what we are thinking. Everything else, open minded thinking, thinking out of the box, is a thread to the system, is a taboo and the crowds follows the command of his invisible king (of this reality build on sand) to suppress everyone and everything that swims upstream.

What can I personally do?

Every single individual should recognize their responsibility and take action to change their own way of thinking. Instead of following the path of the ego one should serve the others. These are nothing new. The greatest man who ever lived has once said that we should serve and love each other. This is an attitude to achieve, a way of thinking. Achieving more knowledge and insight of what the Bible says how we should act and think will transform our personality. Behind the Holy Word is a spiritual force, a vast field that belongs not to humans morphic field, but to a morphic field of heavenly creatures serving the ONE consciousness. If we reconnect to this field, new paths will be established. Millions of people are right now doing this.

The Awakening of the Collective Consciousness will be like a Big Monster wave. We need to prepare on individual level to surf on this huge wave, else we will be overwhelmed by the great amount of spiritual energy flowing through the human field when the Awakening will happen.

This means not that we need to fear the crowds and the few elites, but we need to fear in a positive manner the ONE consciousness that soon will act against the supporter of this system of enslavement. We are only ants. The ONE is much bigger and powerful than we can imagine.

Is the establishing of a new way of thinking difficult? Yes, it is! But it is like learning to surf. If you succeed only once on holding the balance for a short time, you will get addicted to it, for your benefit and for everyone else too.