If you dig deep you will discover patterns. By trying to understand reality and the origin of it, consciousness, your search will lead you to a world of numbers and patterns of numbers, because mathematics is a universal language and consciousness itself express through language.

Patterns in nature follow a simple basic sequences, which reveals higher complexity if they interact together. Scientists calls them emergence or emergent phenomenon. Recognizing this patterns means to recognize the way consciousness express and understand by logic the fundamental concepts. One of this simple sequences are the Fibonacci Sequence.

… reveals only a counting up of the previous one.

Fibonacci is different. It adds always the previous result to the next result, like

, then the result is

The next parts in the sequence are …

Looks simple right? Indeed it is very simple. But the implications are huge!

Look between the numbers

As you can see here in the chart below the blue line represents the ratio between the Fibonacci Pair Numbers. The ratio levels out on a very special value: The Golden Ration or Golden Number = 1.618… this number too is everywhere in nature, evidence for a higher order, a ratio for beauty and energy efficiency, the optimum for space utilization in nature and the intervals between notes, … you can find it everywhere and it enables life! 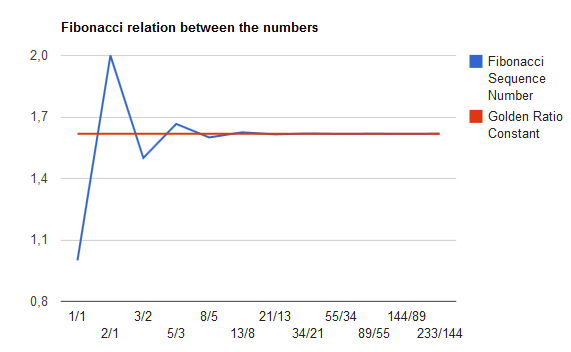 Fibonacci Spiral and the Life Force

Life requires order, or should I say life creates order?! Well, without order life is impossible. Every life-form has structure, order, informations which makes sense and all of them points towards a meaning. The Fibonacci numbers represents a kind of order which is observable in the entire universe.

The so called “Fibonacci Spiral” represents a never ending inward flowing spiral, which each cycle is smaller than the previous cycle by the ratio of the golden mean. This kind of spiral is only perfect, never ending, because it is based on the golden ratio of 1.618…

A Fibonacci spiral created by drawing circular arcs connecting the opposite corners of squares in the Fibonacci tiling; this one uses squares of sizes 1, 1, 2, 3, 5, 8, 13, 21, and 34.

In other words, if somebody would give you the small buildable vacant lot and you could miniaturize yourself for every tiling square by the ratio of the Golden Mean, you could create yourself a never ending universe inside a limited space!!! This implicate that you need to build a framework which is holographic, self-similar, fractal … perfect in itself.

Now what does this mean for our consciousness? Well, our consciousness relies on perfection, else it cease to exist. It’s like changing the variables in a formula and the rocket leaves the orbit, without having the chance to get into orbit again. You cannot change perfection, nothing can be added or subtracted.