How to teleport DNA through Space and Time

It sounds like science-fiction and for sure it is the stuff for a good movie, but believe me this science news comes from a man who has a Noble Price in Medicine, Dr. Luc Antoine Montagnier (can you hear the girls screaming?) and his science colleagues, Jamal Aissa (inventor, author and former member of Benveniste’s team), Emilio Del Giudice (theoretical physicist), Claude Lavallee, A. Tedeschi and Giuseppe Vitiello (theoretical physicist).

What Wikipedia says about Teleportation

Quantum teleportation, or entanglement-assisted teleportation, is a technique used to transfer quantum information from one quantum system to another. It does not transport the system itself, nor does it allow communication of information at superluminal (faster than light) speed. Neither does it concern rearranging the particles of a macroscopic object to copy the form of another object. Its distinguishing feature is that it can transmit the information present in a quantum superposition, useful for quantum communication and computation.

There is no transfer of matter or energy involved. Alice’s particle has not been physically moved to Bob; only its state has been transferred. The term “teleportation“, coined by Bennett, Brassard, Crépeau, Jozsa, Peres and Wootters, reflects the indistinguishability of quantum mechanical particles.

Montagnier and his team “teleported” not literally the DNA sample. They transfered only the electromagnetic signature into a water solution with DNA polymerase where the polymerase was realigned to a copy of the DNA sample. It is like taking a jar full of water and alphabetic character and realign them with a organizing power to a meaningful text.

Does DNA polymerase taste so good as Alphabet pasta?

A DNA polymerase is an enzyme that catalyzes the polymerization of deoxyribonucleotides into a DNA strand. DNA polymerases are best-known for their feedback role in DNA replication, in which the polymerase “reads” an intact DNA strand as a template (or the “electromagnetic signature” transfered by the Benveniste Method) and uses it to synthesize the new strand. This process copies a piece of DNA. The newly-polymerized molecule is complementary to the template strand and identical to the template’s original partner strand. 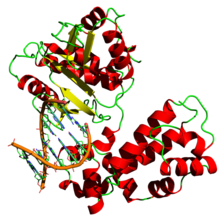 In order to recreate a copy of the DNA in a polymerase solution far away from the original DNA sample we need the “organizing power” of this DNA sample, which will move the single “alphabetic characters” to their specific positions, or enabling it’s reassembling by altering the probability that it occurs (if you like quantum mechanic stuff).

How do homeopaths extract the “organizing power” of the original substance?

Homeopathic remedies are prepared by serial dilution with shaking by forceful striking on an elastic body, which homeopaths term succussion. Each dilution followed by succussion is assumed to this increases the effectiveness. Homeopaths call this process potentization. Dilution often continues until none of the original substance remains.

Succussion activates the Vital Energy of the diluted substance

In producing remedies for diseases, homeopaths use a process called dynamisation or potentisation whereby a substance is diluted with alcohol or distilled water and then vigorously shaken by ten hard strikes against an elastic body in a process called succussion. Hahnemann advocated using substances which produce symptoms like those of the disease being treated, but found that material doses intensified the symptoms and exacerbated the condition, sometimes causing dangerous toxic reactions. He therefore specified that the substances be diluted. Hahnemann believed that the succussion activated the vital energy of the diluted substance and made it stronger.

In order to “free” the “vital energy” of the substance it requires succussion process. Diluting the solution is not enough to produce a signal generating solvent. The gross, larger material has to be filtered out first. Then the water molecule is magnetically attracted to the “contamination” (guest particles) and will configure around them according to the guest charge. This is how water structurally and dynamically imitates other substances. If the particle is too big for water molecules to uniformly assemble around it, the chunk then acts as a chaotrope, a disorder inducing particle.

What Montagnier did by filtration, homeopaths do by triturating with mortar and pestle, grinding the starter material down to the finest powder possible. It would appear that Montagnier has discovered that filtration creates the same effect.

By filtration Montagnier is creating kosmotropes, a kosmotropic solvent. The order created by these kosmotropes extends ubiquitously throughout the solution via the hydrogen bond network.

The original substance needs to go through a specific process that enables the water to copy it’s structure. Else the water will remain in a “chaotic state” without useful information. Alcohol plays the role of a kosmotropic solution, stabilizing the water structure.

Solutes are defined as kosmotropic if they contribute to the stability and structure of water-water interactions. Kosmotropes cause water molecules to favorably interact, which also stabilizes intermolecular interactions in macromolecules such as proteins.

High generic salts can have chaotropic properties, by shielding charges and preventing the stabilization of salt bridges. Hydrogen bonding is stronger in nonpolar media, so salts, which increase the chemical polarity of the solvent, can also destabilize hydrogen bonding.

Mechanistically this is due to there being insufficient water molecules to effectively solvate the ions. This can result in ion-dipole interactions between the salts and hydrogen bonding species which are more favorable than normal hydrogen bonds.

In ancient Israel salt was used for purification. A interesting fact is that the homeopathic remedy Natrium muriaticum is made of ordinary salt (Sodium chloride) and it is used for people that suffers because they cannot forget their past (emotional) injuries. Another very interesting fact is that in the Bible salt is a symbol for righteousness. Why is it interesting? Because the crystal structure of sodium chloride is a cube and the “Holy of Holies” was a perfect cube, its length, width and height were all equal to 15 feet. In order to forgive the sin of humanity it requires righteousness and to “forget” our sins (etymology: forgive = to give up).

The Resurrection of the DNA

The discovery of Benveniste and Montagnier will change the world of science. Naturally for a short time most scientist will deny the special property of water because they depend on a materialistic science and capitalism and they fear to loose prestige and money. But the time is over. We are facing a very critical time in which the whole system of this world is driving fast toward it’s end. What will come next? I hope and I believe as millions of people today in a new world that will be ruled by a righteous heavenly government. The organizing power will then derive from a invisible realm high above of any human. What we are actually experiencing in modern science is the discovering of things that supports the idealistic worldview, that life is not a product of pure chance, that there is a God, a eternal spiritual being (with a personality and a name) which created all things and that he is outside of time (King of eternity). Day by day the amount of evidence that we need God’s Kingdom as solution for all problems becomes overwhelming.

A life full of sacrifice and stress is not worth living if there is no possibility to continue to live for eternity on a earth that will be transformed gradually in a paradise under the rule of a heavenly government. Science proved that the DNA is able to imprint it’s signature into the space-time (Vacuum Substructure). The so called “DNA Phantom effect” was discovered by the scientists Dr. Vladimir Poponin (here you find some of his mainstream works). This discovery points towards a global memory field which can be accessed under the right conditions. The hope that millions of people today have is that their beloved dead one will live again on earth. The Bible mentions very often the hope of resurrection. There is no doubt after the scientific discoveries made by Poponin and Montagnier that resurrection is possible. Well only who wish the contrary would now deny the scientific facts. Materialism is a refuge place for week egoistic people that are not willed to accept the Truth.

Montagnier, Poponin and the Joe Cell

On economic scale such discoveries will knock off capitalism from it’s pedestal. The biblical prophesy that money (gold and silver) will be left on the streets and nobody will pick it up (Ezekiel 7:18-20) will soon become a reality, because it’s evaluation period is over. New free energy technology will emerge suddenly out of open source communities replacing the expensive and pollutive old technology. Materialistic science will be replaced by a new spiritual science that will acknowledge the existence of God and the need of humanity to subordinate to it’s Kingdom.

The Joe Cell is such a free energy technology that is composed of concentric steel tubes. It is a cheap and safe technology that can deliver every household it’s own independent energy source. The principle of the Joe Cell is that water is able to store information. Through it’s special configuration of concentric steel tubes the water in the Joe Cell is configured to copy more and more of this “Electric Organizing Power” and transmitting this energy into a engine where it cause the air inside to implode. When the spark fires the air (that is already full of a higher order) will transform into a electrical plasma vortex. The space required for it’s end product is less than before the spark ignition. So the pistons are sucked up, running the engine on implosion instead on explosion.

Countless free energy inventions based on free-energy-technology are ready to “infect” the world and spreading like a virus replacing all old technologies that are a threat for humanity. The conditions for the “free-energy-virus” are now ideal.

For all people that are interested in the Joe Cell: It is not a electrolysis apparatus. The water inside the cell is not constantly under a electric current. Only at the beginning in order to start the “seeding process” the Joe Cell is attached to a voltage source (12V Battery). After some minutes the seeding process starts and it continues eternally if it is not interrupted by strong magnetic fields. The engine runs not on hydrogen! It runs by the true nature of energy: order.

– Can specific biological signals be digitized?

– Extraction of timelike entanglement from the quantum vacuum

– Can Our DNA Electromagnetically ‘Teleport’ Itself? One Researcher Thinks So

– THE ELECTRIC ORGANON: Theory for the Structure and Action of the Homeopathic Remedy