The diagram below shows a new cognition being integrated into a person’s belief system to resolve such a conflict. 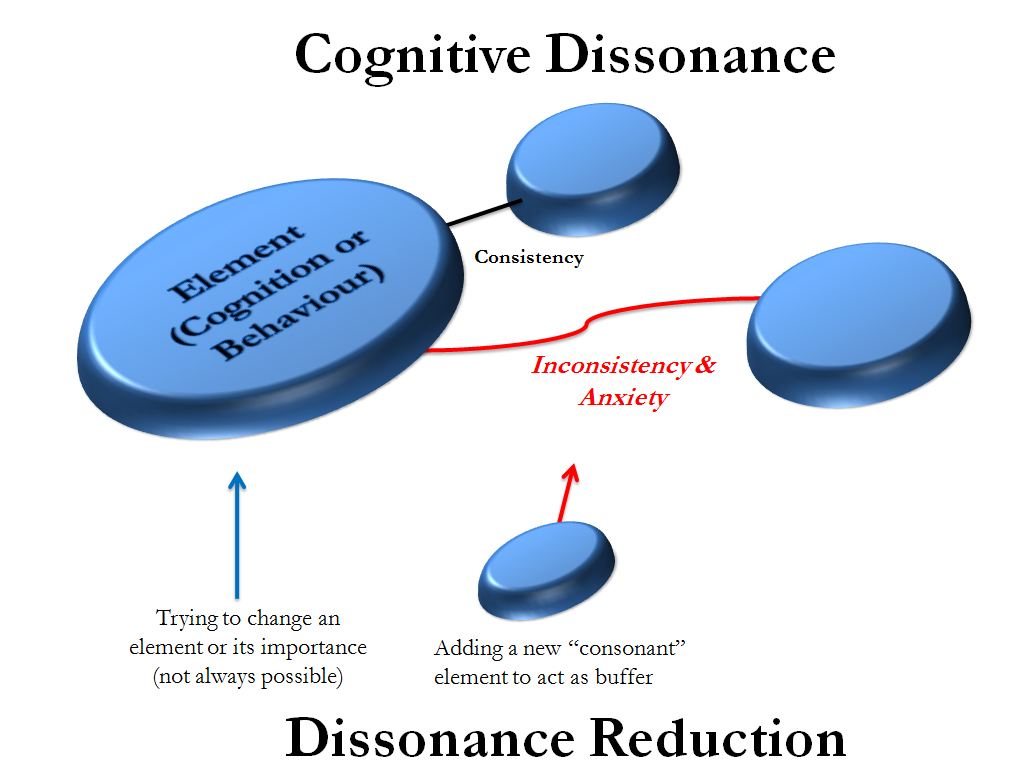 Diagram of the theory of cognitive dissonance. Rationalization (making excuses) is often involved in reducing anxiety about conflicting cognitions.

An example of this would be the conflict between wanting to smoke and knowing that smoking is unhealthy; a person may try to change their feelings about the odds that they will actually suffer the consequences, or they might add the consonant element that the smoking is worth short term benefits.

The phrase was coined by Leon Festinger in his 1956 book When Prophecy Fails, which chronicled the followers of a UFO cult as reality clashed with their fervent belief in an impending apocalypse. Cognitive dissonance is one of the most influential and extensively studied theories in social psychology. Cognitive disequilibrium is a closely related concept in the cognitive developmental theory of Jean Piaget: the inevitable conflicts a child experiences between current beliefs and new information will lead to disequilibrium, which in turn motivates the child’s progress through the various stages of development.

Cognitive dissonance theory warns that people have a bias to seek consonance among their cognitions. This bias gives the theory its predictive power, shedding light on otherwise puzzling irrational and even destructive behavior.

A classical illustration of cognitive dissonance is expressed in the fable The Fox and the Grapes by Aesop (ca. 620–564 BCE). In the story, a fox sees some high-hanging grapes and wishes to eat them. When the fox is unable to think of a way to reach them, he decides that the grapes are probably not worth eating, with the justification the grapes probably are not ripe or that they are sour (hence “_sour grapes_“). This example follows a pattern: one desires something, finds it unattainable, and reduces one’s dissonance by criticizing it. Jon Elster calls this pattern “adaptive preference formation”.

Perhaps the most famous case in the early study of cognitive dissonance was described by Leon Festinger and others in the book When Prophecy Fails. The authors infiltrated a religious group that was expecting the imminent end of the world on a certain date. When that date passed without the world ending, the movement did not disband. Instead, the group came to believe that they had been spared in order to spread their teachings to others, a justification that resolved the conflict between their previous expectations and reality.

Smoking is a common example of cognitive dissonance because it is widely accepted that cigarettes can cause lung cancer, and smokers must reconcile their habit with the desire to live long and healthy lives. In terms of the theory, the desire to live a long life is dissonant with the activity of doing something that will most likely shorten one’s life. The tension produced by these contradictory ideas can be reduced by any number of changes in cognitions and behaviors, including quitting smoking, denying the evidence linking smoking to lung cancer, or justifying one’s smoking. For example, smokers could rationalize their behavior by concluding that only a few smokers become ill, that it only happens to very heavy smokers, or that if smoking does not kill them, something else will.

This case of dissonance could also be interpreted in terms of a threat to the self-concept. The thought, “I am increasing my risk of lung cancer” can be dissonant with the self-related belief, “I am a smart, reasonable person who makes good decisions.” Because it is often easier to make excuses or pass judgment than it is to change behavior or values, cognitive dissonance research contributes to the abundance of evidence in social psychology that humans are not always rational beings.

Cognitive dissonance has also been demonstrated to occur when people seek to:

There are other ways that cognitive dissonance is involved in shaping our views about people, as well as our own identities (as discussed more in the sections below). For instance, Self-evaluation maintenance theory suggests that people feel dissonance when their cherished skills or traits are outmatched by close social ties (e.g. Jill the painter feels dissonance because she is friends with a master painter - Jill can either care less about painting, or justify her inferiority in some other way). Balance theory suggests people have a general tendency to seek consonance between our views, and the views or characteristics of others (e.g. the religious believer feels dissonance because his partner does not believe the same things - dissonance which the believer will be motivated to justify). People may self handicap so that any failures during an important task are easier to justify (e.g. the student who drinks the night before an important exam in response to his fear of performing poorly).